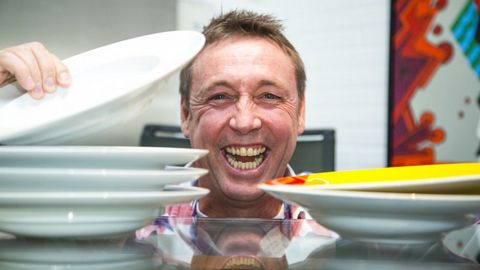 Second round for the sloped plate from Osnabrück

Osnabrück. An oblique concept originated in Osnabrück caused trouble in porcelain shops 14 years ago: the sloped plate. However, the idea of the dented plate was not carried out due to a small hindrance. The defect has already been corrected by the inventor Claus Roeting and now begins the second round...

This sloped plate retains the last remains of soup in a slot. That is very practical, because you no longer need to tilt the plate. In addition, smart cooks can use the “obliquity” factor, which cannot be seen at first glance, for unusual creations. The renowned porcelain manufacturer Seltmann Weiden added this plate with hollow to his collection in 2002. Maggi made this a publicity stunt. In total, they have sold about 150,000 units, underlines Claus Roeting, founder and general manager of CRIMEX. Although the idea caused a sensation at first, it did not succeed in the catering trade. Guests like it, but not the kitchen staff. That is because the sloped plate is not stackable. From the fifth plate, the tower begins to lean dangerously to one side. And this is, to tell the truth, not practical.

The solution went along with a quite smart Spanish student. Ramón López Mera came to Osnabrück as a student through the Erasmus exchange program and ended as a trainee at the advertising company CRIMEX. The company manager, Claus Roeting, put him to work on the plate and after a while Ramón López Mera found the solution: a notch at the top and another at the bottom. This principle is not new, since it is also applied to stackable glasses. However, for the first time, Roeting´s team could now produce plate prototypes thanks to 3D printing technology and test the stacking capacity on a real object. Without this three-dimensional plastic printing, each of the plates would have needed to be burnt which would have presented an additional charge, because of the great costs.

Ramón López Mera still has more to show. When looking over his shoulder, he draws on a sheet of paper the outline of a backpack with a zipper which closes automatically when fastening the straps and which cannot be opened while being carried on the back. Whether this invention goes into production? Roeting shrugs and laughs.

The 46-years-old inventor seems to have become more cautious about marketing his ideas. The sloped plate, as he says, would have had a better chance if the partners of the product, which is called “excentra”, would have marketed it in a smarter way. Therefore, in mid-2015, the businessman wants to launch this new version of the plate by himself, with a price of 14.90 Euros for a pair of plates. “This is the range of prices for a little birthday present,” says Roeting, who trusts in the viral spread of the plate´s idea in the social media.

- The Story continues: Second round of the sloped plate from Osnabrück | noz.de