Innovative company in the Osnabrück-Emsland region

A lopsided plate? At first it sounds like a set square to make curves or like a thermos with tea warmer. However, for Claus Roeting, business owner of CRIMEX GmbH, the idea has proved a success in public relations and has granted him entry into the world of porcelain production. In recent weeks, we have seen the 34-years-business in country media. Always before him, a plate with integrated oblique angle.

Media hype at the office 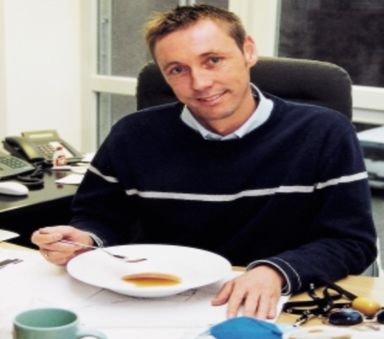 Claus Roeting (34) and the original sloped plate which has caused the media hype. Photo: bö

After the newspaper Osnabrücker Zeitung reported on the sloped plate, phone lines of the office of street Bruchstraße collapsed. In the same vein, reported the local press, the newspaper Süddeutsche Zeitung and the German Press-Agency (DPA). Meanwhile, Roeting was invited by the program Aktuelle Schaubude, he was visited by a team from the ARD and even awakened the interest of the BBC for this unusual idea.

“All this is very funny,” says Roeting who, as advertising expert, knows really well the importance of a good advertisement. It particularly pleased him and his team that companies of the Osnabrück and Ems region have turned their attention to CRIMEX GmbH as well. Remarkably that first company had to create a sloped plate in order to gain their interest, because in terms of creativity the company is up to date since 1993.

While still being a student of European Business, Claus founded his own company for the purposes of “bringing fashion to the customized items industry.” Football scarves, caps and other “fan articles”… all these items have no longer their bored appearance. Fans of FC St. Pauli, FC 1 Köln or Bayer Leverkusen have benefited from it, among others.

Two and a half years ago, Roeting, who previously was engaged in fabrics purchasing for other companies, became freelance. With the growing success of his business, the number of employees was increased progressively. “We are proud to count on seven employees and three part-time employees.” Practical knowledge for merchandising will be also transmitted to a trainee for wholesaling and retailing.

Advertising media and products are the core business of the company. Everything that somehow serves as merchandising article is printed, embroidered, glued, etc. Therefore, it is not surprising that Roeting´s office is a kind of treasure chest in which everything trendy comes together. Closets are full of caps, bags and t-shirts, whose impressions are read like the Who-is-Who of multinationals.